Ben was born in South America Chile but raised in Northern California. Influenced by his musician parents, he couldn’t help but to pick up the guitar at an early age. Like all kids, Ben went through different phases of musical genres. Night after night listening to his parents different records, artist’s like The Bee Gee’s, The Beatles, Earth Wind and Fire, Led Zeppelin, Pink Floyd, B.B King and of course his Mom’s favorite “Salsa”. After learning and studying all these styles for so many years, he finally came a cross an artist by the name of Bob Marley. A whole new door opened up for him, “Reggae”. As any reggae fan would, Ben discovered other bands like Steel Pulse and UB40. Mixing reggae with his rock, blues, and latin grooves was the beginning of a new style, that he likes to call “CHALA”.

At the age of eighteen, Ben moved to Maui Hawaii to build with his father. He immediately fell in love with the island, its love for reggae music and of course “Da Surf”. After the house was built, he decided to work and live on his own. Working as a waiter in a fine dining restaurant and playing music on the side, which lasted about two years. At this time, his South American roots had been calling him. It was time for a change, the thought of learning Spanish, playing latin music and meeting the other half of his family was extremely inviting. So, he packed his bags, jumped on a plane and in 24 hours he landed in a foreign country that immediately felt like home. What he thought would be a three month trip, turned into seven years. Describing Chile in his own words ” Chile is full of life, music and culture, surrounded by passion and love”. He thought he would never leave.

After building several houses with his father, snowboarding year round and playing live music on a frequent bases, his life got flipped around after one phone call. Ben’s mother was fighting cancer. There was only one thing to do, drop everything he was doing and move back to America to take care of her. Ben and his brother Sebastian wanted to give their mother the best. So, with know hesitation they brought her to Maui Hawaii. The whole move was a blessing in disguise. Bibi brought Ben back to Maui!

Since then Ben Cerda has been living on Maui and living the dream. For four years Benjamin played bass for The Alliez which played countless shows through out Hawaii, and two West Coast tours which included Reggae on the River twice. After playing and touring with several bands from both Maui and California, Ben decided to start his own project “CHALA”. Trying to find the right players was not easy, but in the beginning of 2013 Ben put together a five piece band that has clicked ever since. On lead vocals and guitars Ben Cerda, on bass guitar Kana Pikini, on lead guitar David Electric of Steel Pulse, on keyboards and vocals Andrew Hubbard aka Dooby, on drums Jimmy Cui, on trumpet and back up vocals Stephen Bradley of Steel Pulse and No Doubt, and on back up and lead vocals Natalie Robles.

All of these musicians are very well known on the islands of Hawaii and abroad. At the same time, CHALA has collaborated on and off stage, and in the studio with artists like Irie Dole, Jordan T, Lawaia, Lion Fiyah, Jeff Hornbeck, Becki D, Paul Bunaun, Hector Serrano, Calvin Canha of Inna Vision & The Late Ones. On and off stage CHALA has an energy so positive and contagious, you can’t help but want to be apart of it.

In the winter of 2013, CHALA recorded there first Single “DAWN PATROL”, which immediately attracted attention through out radio in Hawaii. Soon after that they released the single hit “NEW BEGINNINGS” which stayed on radio rotation all of 2013. Soon after that, CHALA released “CAN’T STOP SMILING” which went straight to #1 requested song on Q103 Maui Radio. In March 2014, CHALA released their first full length album “WALK THIS WORLD”. The album is a mix of reggae, R&B, rock and folk. Since then, “WALK THIS WORLD” has gotten world wide attention and continues to get play on radios in Hawaii, California and South America.

In December of 2014, CHALA lead man Ben Cerda went on a solo acoustic tour that started in Austin Texas and ended in San Diego California. In April of 2015, CHALA released the new hit EP “PEACEFUL FARMER”, which included Hawaii’s #1- 420 song “Smokin Trees” featuring Irie Dole and Yaya Lioness. Since then, the EP has attracted worldwide distribution, and CHALA promoted the new EP in May of 2015 with a four month tour through South America Chile and Argentina. CHALA then released the hit single “NO MORE FRICTION” featuring Lion Fiyah in January of 2016, and has gotten play through out radio’s in Hawaii, the West Coast, and South America.

The whole year of 2016, CHALA focused on touring and working on the new album. In March of 2017, CHALA released their most influential album yet “By Your Side”. The album got immediate attention, and the single “Let It Rain” hit #1 on the reggae radio charts in Hawaii. Following the release of the album, CHALA has been touring with their CD Release through out Hawaii and South America Chile.

Stay tuned for further dates and locations. You can find CHALA music, videos, bio’s and upcoming show’s on their website www.chalamusic.com 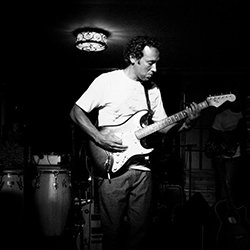 The band was originally formed by lead guitarist and vocalist Benjamin Cerda in 2013. Born in Chile, raised in California, Benjamin brings the passion of South America and inspiration of California to the islands through his music. His influences range from Led Zepplin, Bob Marley, Manu Chow, The Beatles, etc etc.

A carpenter by trade, he built a recording studio and is the owner and operator of Maui Baseyard Studios. He has been building his dream creating a space for the talent of Hawaii both on and off the stage.